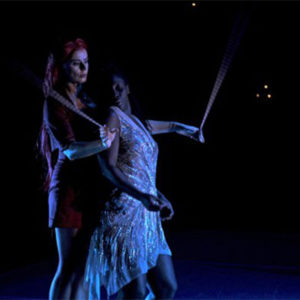 BLOCK 1
The public enters and settles. The light of the room declines. In the distance is heard the whistling of the wind. It gets closer and it is a real storm that crosses the room, from top to bottom, passing over the heads of the spectators. The whistle goes away and in this silence, this calm after the storm, we hear a weather announcement: “A zone of high pressure crosses our regions; It causes winds of up to 180 km per hour. This tropical anticyclone rotates the winds counterclockwise in the northern hemisphere as it rotates them clockwise in the southern hemisphere. Be careful, thunderbolts are to be feared. The duration of a lightning strike is generally very short (0.09 seconds), but in this high pressure zone it can last for 2.7 seconds, with 12 successive discharges. Great caution is called for. The government advises anyone with asthma, respiratory problems, cardiac problems, or non-professional obligations, to remain in her home until further notice.

“The tray lights up. In the middle of the stage stands a majestic mask whose origin is intriguing. It has characteristics at the same time African, Amerindian, Chinese, aborigines, Indian … A man in uniform of security officer enters. Surprised by the strange object, he goes to look for his colleague. They come back in force.

Second man.
Sir, you can not stay here …

Second man.
It is a private space …

Second man & first man.
You speak English? Do you speak English? Hello? Do you understand us? Me and my colleague My name is Jean-Claude; My name is francis. And you, what’s your name? Where do you come from? Are you coming from another country? Are you a French? Do you know someone in the city? Do you have any family here?
It’s closed. You can not stay here mister, it’s verboten. It’s finish. No more popcorn … Mickey does not go back … it’s tea time OK? This is not a public square …

Second man
Do you play football?

First man.
(To his colleague) … huh ?!, what does football have to do with it?

Second man.
If he is good at football, he is entitled to an accelerated procedure and he can have his papers right away …